This popular regatta hosted by Deauville Yacht Club attracted 16 boats from 29th June to 2nd July and 9 races were completed over the 4 days. Current French National Champion Jean Breger FRA 391 opened the regatta with a 3rd & 1st to take a one point lead from Gerry Laamens helming NED 318 who also had a very good first day 1st & 4.

Ron James was the toast of Deauville, celebrating on Champagne after winning Race 6 & Race 7 !

After racing on Friday the DYC held the Crew Dinner at their stunning new clubhouse which was well attended. President Eric Lebon gave an inspiring speech thanking LINKERS Chairman Philippe Delecourt for their continued support. Philippe also promised to keep the sponsorship going and looked forward to the 10th anniversary of “LINKERS” involvement with DYC in 2024.

On the final day President du Comite’ de Course Patrick Villette managed to complete 2 more races in a building breeze to the delight of the competitors. The first race of the day (race 8) was won by BEL 82 helmed by Xavier Vanneste, who will soon be welcoming sailors to the prestigious Gold Cup in Ostend. The final race of the championship was won by NED 442 Andre Dupon who was sailing his brand new Petticrows, the 4th boat built at the new factory in Portugal. Andre and his team of Siebe De Boo & Huib Bannier rounded of an excellent series to finish 3rd overall. In 2nd place overall was GBR 633 Ron James crewed by Nigel Young & Joanna Richardson. Ron and his team could not repeat their amazing two bullets on the previous day, but did enough to secure the runners up spot. 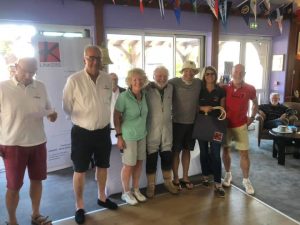 The Winners of the Championship was FRA 391 Ulysse helmed by Jean Breger, with Christian Gout & Jean Paul Roux. This very successful French team fully deserved to add yet another trophy to their cabinet and there were smiles all round at prize giving. 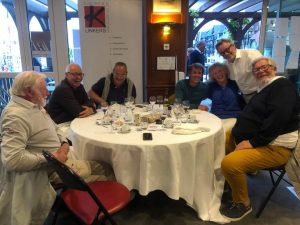 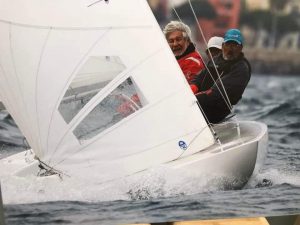 In closing l would like to thank all of the Race Committee, the DYC helpers and volunteers, sponsors LINKERS and President Eric Lebon for another fantastic regatta. Deauville is an amazing place to visit with a quality shopping centre, beautiful beaches, wonderful accommodation and one of the best Yacht Club’s l have ever had the pleasure to enjoy.

I encourage more Dragon Sailors to join the fun in 2023, you will not be disappointed.